Avadi in western Chennai is situated along the Chennai-Thiruvallur NH 716 – 23 km from the city centre.

Over the years, this micro market has transformed from a major defence hub to a key real estate hotspot, with both residential and commercial developments.

Attracted by its green and serene environment, homebuyers (including current and ex-defence employees) have purchased properties in this locality.

Avadi has seen robust infrastructure growth in the past few years, boosting residential activity by both end-users and investors.

Given its heritage, Avadi houses many defence and military establishments such as Indian Air Force, Heavy Vehicles Factory (HVF), EFA – Engine Factory, to name a few.

Additionally, the IT-ITeS sector and other industries also have a base in and around Avadi. This fact, coupled with its well-defined defence ethos which lends it a secure feel, make Avadi a preferred residential location for their employees.

Avadi railway station serves the neighbourhood of Avadi and is the major railway terminal of the Chennai Central-Arokkonam section of the Chennai Suburban Railway Network. 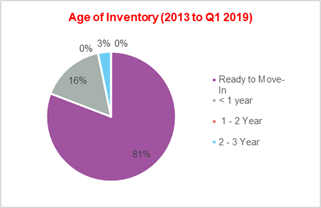 Interestingly, despite low launches from Q1 2017 to Q1 2019 due to the impact of economic reforms, property prices in Avadi appreciated over 6%in the same period.

There are 1,150 unsold units in the market, out of which only 260 are under construction and remaining are ready-to-move-in.

With maximum real estate activity in the affordable and mid-segment categories, Avadi is fast transforming into a buzzing realty hotspot.

Despite reduced launches in 2016 and thereafter, property prices have appreciated and this is drawing investors along with end-users.

Avadi is also the most-preferred housing destination for people working in the nearby IT hubs such as Ambit & Indiabulls IT Park and the DLF IT Park.

This, along with the existing connectivity, the presence of defence establishments and good infrastructure facilities, make Avadi an excellent bet for homebuyers and long-term property investors.

Rainwater Harvesting: How Long Can India Afford To Ignore It?