As anticipated, the real estate market across the top 7 cities in Q3 2018 stayed subdued. The quarter saw a meagre 3% increase in the overall fresh housing supply as against the preceding quarter.

These new launches were largely dominated by the lower-budget segment (< Rs. 40 lakh) with nearly 42% of the total new supply. 33% launches were in the mid segment (Rs. 40-80 lakh) and the remaining 25% in the luxury and ultra-luxury segments.

The third quarter of the year is usually a lull period due to the 15-day shraddh period, which is considered inauspicious for buying property. Consequently, builders keep new projects on hold for the ensuing festive season beginning early October.

In terms of purchases, there was a slight increase of 9% during the Q3 as compared to Q2 2018 across the top 7 cities of India. This indicates that even though home buyers’ sentiments are positive, many continue to wait and watch.

ANAROCK’s ‘Real Estate Consumer Outlook Survey’ confirms that nearly 61% prospective buyers are looking to buy their property within the next one year. Given this, the festive season may bring a boost to the real estate sector this year.

“Q3 2018 saw only a minimal increase in both new launches and absorption over the previous quarter,” says Anuj Puri, Chairman – ANAROCK Property Consultants. “However, there has been a 51% jump in new housing supply against Q3 2017. Purchases also rose by 15% this quarter as against Q3 2017. Buyers and developers alike are pinning their hopes on the ongoing festive season for better deals and faster deal velocity respectively. Lower-budget range housing continues to keep the momentum going. This segment saw a nearly 65% increase in supply in Q3 2018 as against the same period last year.”

The cities contributing most to new unit additions in Q3 2018 include MMR, Pune, Bengaluru, and Chennai. Together, these three cities accounted for 76% of the new supply.

Developers’ focus on completing existing projects rather than launching new ones aligns with the current market sentiment.

ANAROCK’s Real Estate Consumer Outlook Survey underscores that, to the backdrop of stalled or delayed projects, only 5% prospective buyers are looking to buy homes in new projects. 49% prefer to buy ready-to-move-in properties, and 46% prefer projects that will complete within a year.

“In terms of housing purchases during Q3 2018, all cities together witnessed an increase of 9% over the previous quarter,” says Anuj Puri. “MMR and Pune together led the pack with 27% rise in deals compared to the previous quarter. This is attributable to the aggressive implementation of Maha RERA.

Out of all the states and Union Territories in India, Maharashtra takes the first place when it comes to proactive RERA deployment. This had boosted home buyer sentiment in these two cities significantly.” 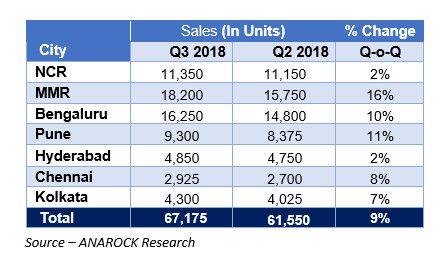 Despite the ongoing pain in Indian real estate, both housing sales and new launches have increased q-o-q. The future depends on a favourable macroeconomic environment in 2019.

What Skills Do Today’s Real Estate Brokers Need To Succeed?

How To Make The Open Office Plan Work