“However, the issue of stalled projects and liquidity crisis continued to confound the housing sector in 2018, though it continued its transition into a relatively more transparent and end-user driven market. End-users accelerated growth while investors shifted focus towards alternative asset classes such as commercial, retail and warehousing, which did fairly well during the year.”

“Builders very extremely cautious about launching projects to align supply with the existing buyer demand. This helped sales pick up momentum in 2018. Simultaneously, builders reduced the average property sizes to align their offerings with the highly-incentivized affordable housing bracket. The affordable segment spearheaded residential growth in 2018.” 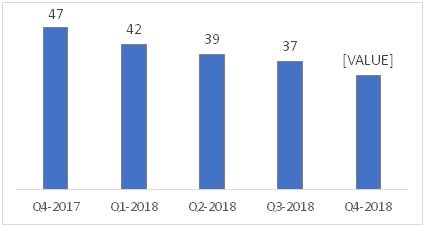 Source: ANAROCK Research (*Months inventory measures how many months it will take for the current unsold housing stock to sell)

GST on under-construction properties was a major hurdle in 2018, dissuading buyers from purchasing properties that fell under its gambit. The twin issues of stalled/delayed projects and financial stress within residential real estate augmented interest for ready-to-move-in properties with most buyers prefer to buy what they can see.

Surprisingly, Bengaluru saw the maximum decline of 13% in average property sizes in 2018, followed by MMR and Kolkata with 11% each. On a two-year basis, the decline in housing sizes was nearly 23% in most key cities, except in Chennai and Bengaluru.

Consolidation via mergers and acquisitions dominated all sectors including residential during the year, completely redefining the definition of ‘financial health’ among players. This trend will continue in 2019 as well.

Residential property prices across the top 7 cities increased by a mere 1-2% in Q4 2018 when compared to the previous year Q4 2017 – except Chennai, where prices decreased by 1% and Kolkata, where they remained stagnant.

Despite the numbers suggesting a positive outlook for 2018, the picture may not be as rosy in at least the first half of 2019. The liquidity crisis – further aggravated by the NBFC issue – has caused mayhem in the industry and early 2019 will continue to see its spill-over effect.

Even while various reforms strove to eliminate unscrupulous players from the real estate ecosystem, the issue of stalled projects needs to be seriously addressed by the Government, or else the recovery of the residential sector will remain compromised.

If developers continue to focus squarely on their core business, remain customer-centric and launch the right products at the right prices in 2019, the residential segment will gain traction. Else, the sector will have to solely rely on petty sops offered by the Government to intermittently boost sales.

How To Avoid Defaulting On A Home Loan

Interim Budget 2019 - Let's Not Get Too Excited